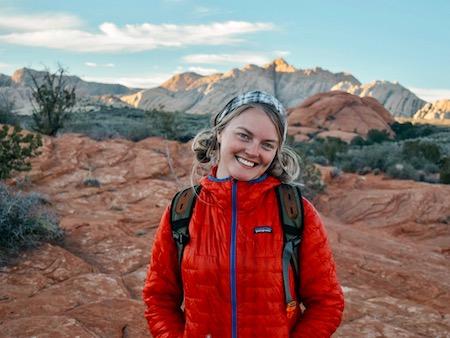 Known Superhuman Powers: Bringing the approachability and adaptability of her namesake fruit, and creating the enthusiastic response that this campfire dessert incites in all who try it, Banana Split is impossible not to enjoy!

Abilities: Banana Split has been almost everywhere bananas can be found: she moved frequently growing up, which exposed her to many different cultures and communities which developed her to be openminded and adaptable (bananas foster, banana cream pie, banana fritters…she can do it all). She loves meeting new people and getting to know them on a deeper level. She is able to find a silver lining in any situation, and loves to help those around her embrace positive change (Got brown bananas? No problem, let’s make backcountry banana bread!) Her favorite part of being a leader is introducing people to new experiences and skills while encouraging them to surprise themselves with what they can do. She loves seeing people grow and connect with their bunch!

History: Banana Split was lucky enough to explore many different parts of the US while growing up in a military family that moved about every four years, but she didn't truly fall in love with the outdoors until moving to Olympia, Washington during high school. There she started hiking with friends on the weekends, which rapidly turned into backpacking, climbing and rediscovering her passion for skiing.

She spent her first college years at Western Washington University, but decided that Montana State University was the best of the bunch for business school (and the ability to go skiing or hiking between classes!). While at MSU, she worked and explored outside as much as possible, letting her restless spirit lead her to all kinds of great adventures: mountaineering, climbing, and backpacking, among others! She has mentored youth for many years in the outdoors through positions as a Montana Conservation Corps Youth Crew Leader and as an Alpenguide, to name a few. She was also deeply involved in the all-women’s outdoor club at Montana State, Backcountry Squatters, where she worked to make sure women had equal opportunities in the outdoors by hosting fun events, clinics, and helping awesome outdoors women connect with each other.

After graduating from college and working for Alpengirl, Banana Split moved to Washington to be a professional ski patroller at White Pass Ski Area. She is very excited to be coming back to Montana and Alpengirl after the ski season in Washington closes up.

Current Base & Operations: Packwood, WA soon to be Bozeman, MT. She loves spending almost every day on skis but is excited to trade out ski boots for hiking boots and welcome all the new campers to Alpengirl!

Heather came back from the trip beaming with confidence! She seems to feel more comfortable in her teenage skin. She is constantly getting comments on how healthy and tone she came back. Your philosophy and small family/like group has given her a sense of self worth and self...