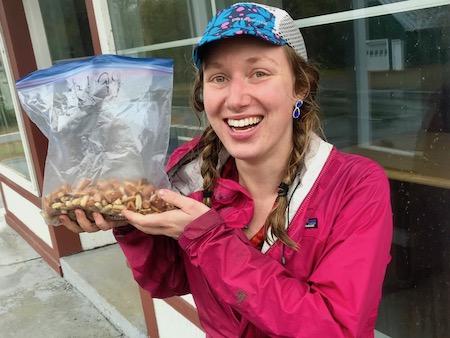 Known Superhuman Powers: Hype Girl MacGee has the power of enthusiasm at her disposal: wallflowers become wildflowers in her presence! Her enthusiasm and energy know no bounds, and she is sure to bring out the positive attitude in everyone, not to mention their best dance moves. The true magic of Hype Girl's powers is that through her encouragement, each person she meets can become their very own Hype Girl, having learned from the best.

Abilities: Does it come as a suprise that Hype Girl MacGee's abilities include infectiously high energy, irresistible hype, incredible dance moves, and long distance running? With Hype Girl, get ready for a coordinated costume, a hilarious dance-off, or a magically conjured snack, just in the nick of time. With her inviting ability to create instantaneous friendships, she's a group-building superstar. Gather 'round for a story from this producer of legends, and become a part of the legend of Hype Girl.

History: Hype Girl grew up in the 'burbs of Chapel Hill, NC, running on the trails and riding ponies. She studied Spanish and Geography at UNC Chapel Hill, and spent her college summers sweating, swimming and swinging around the ropes courses at Girl Scout Camp in North Carolina, while always finding the time to squeeze in a trail run. Following college, Hype Girl made her way to the west coast and started her career in outdoor education as a instructor for PALI in California. After getting her fill of the west coast, she headed back east to West Virginia to lead backcountry trips and teach freshwater education. During her time in WV she started running farther and farther to spend more time in the mountains, and she picked up cross country skiing, never tiring of being outdoors. The most recent stop on Hype Girl's journey was Vermont, where her very first quest was a thru-hike on Vermont’s Long Trail, where of course she fell in love with long-distance hiking. After her tour of the Green Mountains, she stuck around Vermont to run the trails, climb lots of walls, really level up on the XC skis, make lots of pizza, and never stop laughing. Hype Girl MacGee is Wilderness First Responder, CPR and Lifeguard certified.

Current Base and Operations: Bozeman, MT. Hype Girl is excited to call Big Sky country her new home! When not at Alpengirl, she can be found exploring the wild places and befriending locals with two and four feet alike in her new hometown.

Nora has been home over a week and is still talking about her great adventure. She has her heart set on a return next summer and a long-term goal of becoming a counselor. We're thrilled for her and grateful to Alpengirl for providing her with such a self-affirming venue....

Getting Down to Business in the Woods
It’s day 2 of backpacking at Alpengirl camp, and you’re hiking along in the woods with your team of newfound friends. You’re feeling great! There’s been lots of laughter, songs on the trail, and good...
View Blog