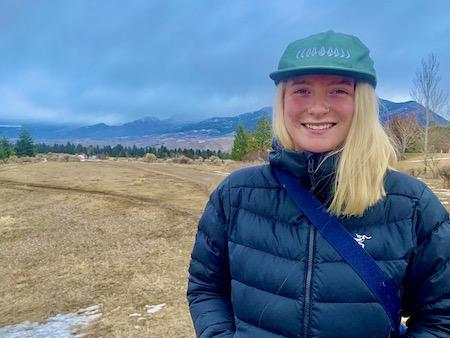 Known Superhuman Powers: PB & Jaid has the power of amalgamation and uses her powers to blend many into one ~ she’s the #1 sandwich hero that binds a group together!

Abilities: PB & Jaid's abilities include cooking delicious backcountry meals, bringing her ecology background onto the trails with a vast knowledge of local wildlife and ecosystems, making any experience a fun, positive and inclusive one, hula hooping and eating way too many PB & J's.

History: PB & Jaid grew up on the north shore of Lake Superior in Duluth, Minnesota. Growing up she spent all of her time enjoying the outdoors by going to various YMCA camps, paddling the Boundary Waters Canoe Area Wilderness with her dad, spending time at her cabin, and enjoying all that the Northwoods has to offer. PB & Jaid was very sports oriented in high school where she competed in freestyle skiing at a national level and went to state for tennis. PB & Jaid has spent summers backpacking around Montana, going on solo canoe trips, and planning canoes trips for canoe outfitters in  Minnesota. PB & Jaid moved to Bozeman, Montana for college and for the big mountain skiing she was missing out on in Minnesota! At MSU, PB & Jaid is pursuing a career in Fish and Wildlife Ecology and she aims to continue her life in the outdoors and eventually work for the forest service as a biologist or Park Ranger. PB & Jaid is Wilderness First Aid and CPR certified.

Current Base & Operations: Bozeman, MT. PB & Jaid spends her winters studying and working as a ski lift operator near Big Sky, MT. She spends almost all of her leisure time skiing, playing with her dog, and going on local hikes.

I thought it was really cool how the Alpenguides taught the campers outdoor cooking. It gave me a chance to improve my cooking skills. It was sweet of the guides to get up every morning and make breakfast. I know it helped to start my day better. The meals that were made were...