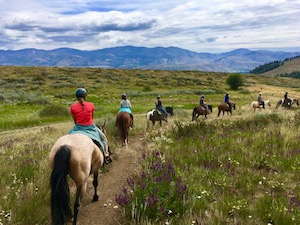 The North Cascades group remains energized tonight although strating to get a bit tired, lots of activity back to back and currenly setting up tents near Bellingham, WA and eating dinner - White Bean Chili:) Yesterday the group enjoyed rock climbing in Mazama, WA and the rock climbing guides said they were so impressed by these girls, they did more climbing than any other group - almost all girls completed all 3 routes set up. After a hot day of climbing they found a swimming hole nearby and played in the water for nearly an hour before heading back to camp for campfire dinner - Pocket Stew and S'mores! After dinner the Alpenwear Fashion Show was a hit - almost all girls purchased hoodies or pants and they are currently still wearing them at camp tonight! This morning Evie earned her Cooking Skill Bead by making the group breakfast burritoes before the girls went on a western horseback trail ride with pretty mountain views and lots of sage. The afternoon today was overcast, had picnic lunch at a lake but no one was feeling like getting into the water due to weather. Then, a long drive back up and over the mountains to the coast with napping, lots of singing in the van (Romina sang all but 5 songs during the van ride:) Tonight they are settling in and getting up early to go kayaking and then a big day of souvenir shopping and awards cermony before the end of camp.

I thought it was really cool how the Alpenguides taught the campers outdoor cooking. It gave me a chance to improve my cooking skills. It was sweet of the guides to get up every morning and make breakfast. I know it helped to start my day better. The meals that were made were...