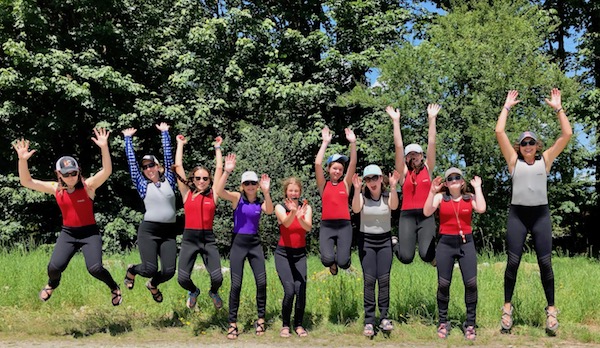 “The Cascades Sea to Summit Adventure started with friends new and old uniting at SeaTac Airport. The girls played games and munched on ripe apricots while we waited with apprehension for the last camper and her bag to arrive. Finally a group of ten, we breathed a sigh of relief as we loaded up into the van, which the girls instantly named “Stanley", and headed north. Despite the usual Friday afternoon traffic leaving Seattle, we spent our time in the van enjoyably, reviewing camp talks and listening to some favorite tunes. Our knowledgeable returning campers were able to chime in to topics such as wildlife, weather, and leave no trace principles with pro tips and hard earned wisdom. 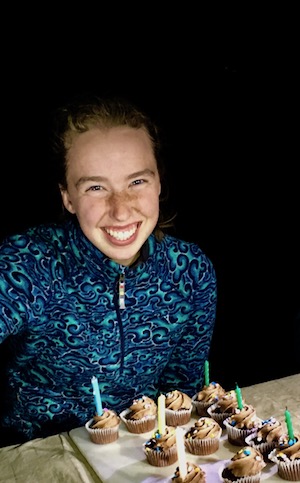 We arrived at our campground in the late evening and learned to set up tents in record time with a setup demonstration by Ellie, Sophia, and Debbie. Then we dined on Alpengirl Welcome Burritos at twilight on the banks of the Skagit River while watching the bats and swallows swooping over the water. After dinner we celebrated Ellie’s sweet 16 birthday with chocolate cupcakes and candles, a birthday song, and a special Alpengirl surprise from Ellie’s mom. Thank you for the lovely gifts!

This morning our first Leader of the Day (LOD), Josie, woke the girls for yoga in the mist with Alpenguide Clara. Then we tucked in to a bountiful breakfast of Strawberry Stuffed French Toast topped with blueberries and fresh peaches. We are enjoying as many fresh fruit and vegetables as possible now before we head into the back country for a week!

After breakfast Maddie and Annie assisted Alpenguide Clara in giving the human waste and hygiene talk with much personality and pizzazz. Then the group participated in an Alpenolympic, which Sophia and Sarah won with a move called “the Chad.” We kept the laughter flowing with games called Yeehaw and G’day Bruce, and it looks like this camp session is shaping up to be 14 days of laughter :)

As we ate our turkey sandwiches and pirates booty for lunch we did a “Roots to Fruits” activity where each girl expressed her hopes and goals for the camp session. They came up with an inspirational visual of a fruit tree covered in words that we have posted in the van so we can see it during camp. Some of the group goals include independence, confidence, positive experiences, self knowledge, memories, new friends, and great muscles :)

After lunch we jumped in the van and headed up to raft on the Skagit River. It was a beautiful sunny day with temperatures in the low 80s, and with wet suits on, all the girls took a dips! Although some were a voluntary and some were not. The girls were split into two rafts, one was called ”JoJo Siwa” and it included Josie Sophia, Sarah, Elsie and Maddie with a rafting guide from Hungary, who taught them lots of rafting games. Raft “Gina Davis” included Annie, Debbie, Sydney, Ellie and Maya. Debbie, Annie and Ellie all “rode the bull” through the rapids and Ellie got to play a game she had been wanting to play for four years called hurricane. Debbie wowed her raft with her tranquility and prowess through the rapids - she is an old hand on the white water!

After rafting we headed back to the campground where Josie Sydney and Debbie whipped up a goat cheese stuffed apricot appetizer and a teriyaki stir fry dinner.

We have a whole group of girls who plan to earn their navigation bead, including Ellie, Maddie, Maya, Sophia, and Sarah. They looked over the road map for the next two weeks and the topographic maps for our backpacking trip, and are looking forward to presenting our route each day to the group. Elsie and Sophia plan to earn their shelter beads are are ready to sleep out under the stars at the first opportunity! 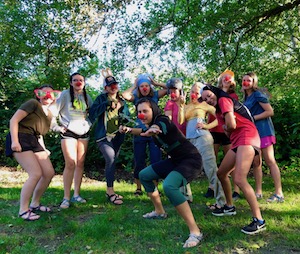 After dinner we had a circus care package for Josie, and she and the rest of the group used their costume pieces from the care package as well as creatively chosen pieces from their own gear to have a costume contest and tarp wrestling extravaganza. Each tarp wrestler presented her character and wrestled the tarp in her own style. Maddie took home the Alpenolympic gold for this event with “Lady Layers” aka the laundry folder’s nightmare.

Spirits are high as the first full day of camp draws to a close, we are our concluding the evening with a discussion about our upcoming backpacking trip and the girls are sharing their thoughts on why wilderness experiences are important to them.

We are looking forward to hiking into North Cascades National Park tomorrow after lunch for nearly a week of wilderness fun, and we won’t be posting a photo or a blog again until we come out of the backcountry on Saturday July 27. Remember, no news is good news. We are doing great!”

NOTE: Also, on Saturday July 27 is the pre-scheduled day that the Alpenguides (Laura or Clara) will be calling parents and telling them how their Alpengirl is doing. Alpenguides call from BLOCKED phone numbers, so picking up those blocked calls on this day is a good idea:) They will try in morning, afternoon or evening and if they miss you when they have time to call, they will leave a voicemail message for you.