Snurfing & Surfing in the PNW 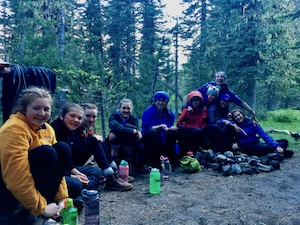 Alpenguides Erin (aka “Spruce”) and Lyra (aka “Bear Cat”) took their group on a bumpy drive to the Lower Falls Campground on the Lewis River last week. They went for a day hike to three different waterfalls on the Lewis River. During their hike, they sheltered from a passing thunderstorm in a stand of old growth trees. All three of the waterfalls were extra gorgeous and they had lunch at the Upper Falls. They hiked back to the campground in the rain, unfortunately, which stayed with them for the following couple days days. Back at the campground, they had a lovely tarp wrestling contest which Ramona won with a creative character named “Saliva,” and built a tarp shelter to hang out in. They were able to have a campfire and cook a delicious campfire dinner and s’mores, and had a great group conversation about wilderness in preparation for going into the backcountry the next day.

The next morning, in mixed showers and sunshine, they drove up to Red Rock Pass, stopping along the way for an energetic roadside dance party, which was so fun that they kept it going for three songs instead of one! They began their backpacking trip in the rain, and the group kept their spirits high by singing as they hiked up to Butte Dome, on the flanks of Mt. St. Helens. They put up their tents in record time at camp in order to shelter and warm up with some cozy tent time. Then they came out for hot cocoa and a warming chicken and rice dinner. The girls kept their guides cheerful with their exceptionally positive attitudes, and Merit was a complete rock star, helping the guides do the dishes in some pretty chilly rain.

In the morning, they set out on a day hike which took them 1.5 miles above their camp to the Loowit trail, which circumnavigates Mt St Helens above the tree line. On the Loowit trail they invented “snurfing” (snow surfing) and had an impromptu snurfing Alpenolympic, won by Ramona. They hiked around the corner on the Loowit trail for views of the foothills of the volcano and volcanic rocks, and had lunch up above tree line with views. Then they hiked down to their camp and had the Alpenolympic Talent Show and a More than Mac n Cheese dinner. Sonja won the talent show with a beautiful poem that she wrote and Tupelo and Ramona did an impressive numebr of forward rolls.

The next day they packed up and hiked 4.5 miles over to Blue Lake, through several big washouts. They had their picnic lunch next to one of them, and were greeted by a sunny, gorgeous view of Mt. St. Helens upon their arrival at the lake. They set up camp and the girls went swimming, some even chose to fully submerge! Remi proved to be our water queen and scared of no freezing alpine lake and they had a Lady Daisy party to get everyone cleaned up. They dined on Ramen from Scratch and Backcountry Tiramisu and did the Toothpaste Eco-spray Alpenolympic, which Merit won with a “sprinkler” move that was particularly excellent. Leaders of the Day for the past several days have been Mckenna, Grace, and Ava. Clio has gotten honorable mention for almost every Alpenolympic - she is a great competitor, and super creative. The group really loved her “fill in the blank” improv skit for the talent show.

Yesterday the group packed up camp in the sunshine after a beautiful yoga session by the lake. The yoga bead girls are now able to lead the group in sun salutations. They had a hearty Tropical Oatmeal breakfast and hiked out from Blue Lake for lunch at the trailhead.  Then they loaded up the van and drove to Astoria to hang out in the park and do a food shop before driving out to Cape Disappointment State Park on the Washington coast. Merit lead the group in a conversation about homesickness for her Group Living Bead, and Mckenna lead a conversation about growing up and becoming a woman which was really great as well.

There are only a few days of camp left, so this will the the last blog, if we have photos to share they will be posted on Facebook and Instagram. The group is looking forward to exploring Cape Disappointment State Park and then heading south for a couple days of surfing and hopefully sunshine on the Oregon coast.

The Alpenguides will be placing parent calls today in the morning, afternoon, or evening. These calls will be from a blocked number, so be on the lookout for that today. If they miss you, they will leave a detailed message.

Despite some reservations on her age and readiness for this kind of trip, I encouraged Em to go ahead and have a great time. I sent a child that liked to sit around on Sat mornings and watch cartoons and eat junk food and I got back a child more self confident, who was into yoga...