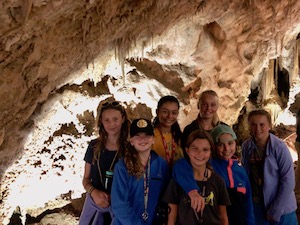 Alpenguide Beth (aka Mama Bear) called in for today’s blog and photos from camp… she is very happy with this group of 7 wonderful girls - they are having a good time!

The airport check-in’s yesterday were super fast and they group started to learn names before a 1st group photo was taken. They left the airport in no time and drove to the campsite about 45 minutes away where they had a nice campsite with shade trees and learned how to set up their tents and were matched with tent mates (Sofie, Caroline, Lola, and Caitlyn. Paige, Kate and Eleanor.) Then, an introduction to meals at camp was followed by Welcome Burritos with chips and salsa and M&M’s getting to know you game where favorite things were listed off by different people ie. favorite memories, summer activities, past accomplishments and more! Campers officially declared the Camp Skill Beads they are going for during the week at camp: Wilderness First Aid: Sofie, Paige. Shelter: Lola. Group Living: Sofie, Caitlyn, Eleanor, Lola. Cook: Kate. Backpacking: Caitlyn. Navigation: Caroline. By 9:30 pm the girls were wiped out and snuggled into bed.

This morning they enjoy their 1st yoga relaxed session with Alpenguide Erin (aka “Spruce’) and followed it up with yummy Blueberry Pancakes topped with lemon yogurt and real maple syrup and served with a side of breakfast sausages, it was a hit!  Alpenguide Erin put on full costume to introduce the topic of backcountry hygiene and bathroom basics, she wowed the group with her “Super Pooper Rockstar” persona. Then, the group learned about all sorts of outdoor camp stuff like Leave No Trace principles and what to do if lightening or wildlife. With the talks finished the group had turkey sandwiches, chips and fruit for lunch before playing the Tarp Name Game and they now all have each others names memorized! They had some free time to play on the play set at the campground nearby before lacing up their hiking boots for the 2 mile hike through the caverns. They had a great Ranger that led their group thorough the underground caverns where the surrounding was dark, cool and beautiful. Today they started the game called “Gotcha!” and currently there are only 3 remaining players still in the game with Alpenguide Beth being one of them! So, looks like they have time during camp to start another round during backpacking. Tonight they are preparing the campfire to cook on, a planned “Pocket Stew” (foil filled packets with potatoes, meats, veggies and seasonings) followed by s’mores. Still this evening they will review the backpacking route with the girls and discuss why wilderness is important before another evening camping out in the front country.

Everyone is in good spirits, some a little nervous about backpacking but nothing in need of attention just the normal newness about backpacking and of the unknown adventures ahead - exciting!  Tomorrow they will get the girls packed up after yoga and breakfast and then have a drive to the trailhead and start backpacking after lunch. They have a short 1 - 1.5 mile hike and a great creekside campsite they are sure to enjoy.

The group is in the backcountry starting tomorrow, so, there won’t be another blog post but, they will attempt to send a photo (if service is found during backpacking trip) and  a photo would be posted to Facebook and Instagram. Weather coming up looks to be a mix of sun and clouds and warm temps, a quick cold splash/dip in the lake is something they will surely enjoy during backpacking. All is well, “no news is good news” and if they need anything they will message the Camp Director using the Satellite Device, there is limited cell service for the rest of this camp session so posting photos and blogs is therefore limited as well:(  Camp Director will be seeing them at the hot springs as they exit the backcountry on August 9 for hot spring soaking, closing ceremony, awards and pizza party!

I really can't say enough positive things about the Alpengirl experience from a parent's perspective! My daughter started with Alpengirl at age 12, flying across the country to get to Montana. She experienced the beautiful outdoors for two solid weeks, gaining an appreciation for...

What’s Next After Camp Registration?
Alpengirl Camp Parents & Campers ~ Now that you've officially registered for camp and Alpengirl has your camp forms, we’re starting to get to know you better by reading about you, talking with...
View Blog