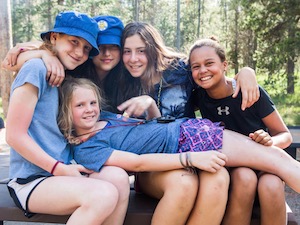 Morning in the Paradise Valley: the summer sun is up and shining, drying dew from yellow grass and several large green tents pitched in a rough semi-circle. Nearby, there are a couple of steaming cups on a picnic table next to a camping stove, and two young women sitting on the benches with a pajama-clad girl. She looks sleepy, but also excited: it’s the first morning of camp, and she has volunteered to be the very first Leader of the Day (LOD) for her session. She is up before all her peers to meet with her trip leaders and learn about her role in the day ahead. Some may not realize the challenge this camper has taken on: she arrived in Bozeman, MT yesterday, and has known most of the occupants of the tents nearby for less than 24 hours. Today, under the guidance of her trip leaders, she will have the opportunity to help instruct, entertain, and direct the group. Her guides equip her with a notebook (“Write down the day’s menu, it’s pita wraps and watermelon for lunch!”), as well as a watch (“We’ll leave for rock climbing at 1 pm - can you help us have the group ready to leave by then?”). She also receives a sparkly headband that denotes her as LOD, which she chooses to wrap around her wrist. Thus equipped, she’s off to awaken each tent group and gather them for the day’s first activity: yoga under the wide blue sky. 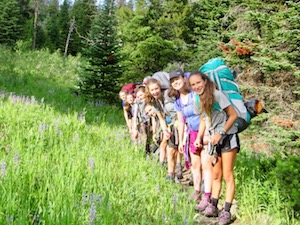 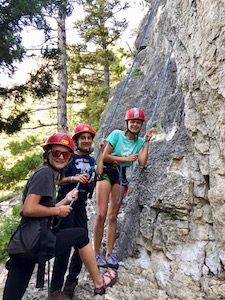 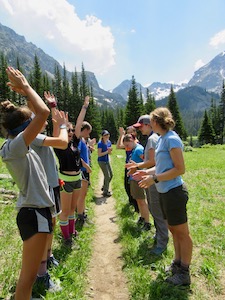 As a summer camp professional, I often wonder about the magic ingredient that produces cohesive, fun, and memorable camp experiences: is it the ratio of mosquitos to flies, or new to returning campers? Is it the number of pancakes consumed, songs sung while hiking, or opportunities to swim alpine lakes? Is it the volume of laughter at the session talent show? But what I return to, again and again, is connection: the key ingredient at Alpengirl is connection between girls, between girls and their leaders, between the group the natural world that surrounds them at camp...and especially between each girl and her inner voice, the voice she practices speaking out loud as leader of the day, and the voice that she will continue to hear long after she says goodbye to Alpengirl.

Written by Laura Strom (aka Cindy Lou Who), Assistant Camp Director and Alpenguide.

I loved Alpengirl so much the first time I went, I came back the next two summers! This camp is incredible! All the guides I had were amazing, and I made great friends each time i went. Every single moment was fun! Alpengirl is a truly amazing experience, and I wouldn’t hesitate...

From the Alpengirl Cookbook
Alpengirl recipes are extra delicious, extra healthy, extra balanced and extra AMAZING! We share our meals at camps and the shared meal experience is a an essential part of what makes our recipes...
View Blog