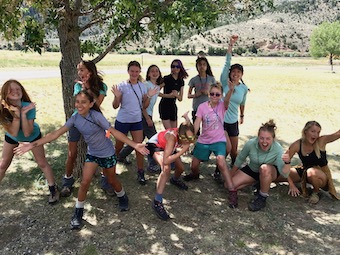 The Montana Lil A’s arrived to beautiful Montana and headed off to to the Lewis and Clark Caverns for the first night of camping!

The evening began with a wonder full meal of welcome to camp burritos, a big hit with all the girls who were hungry after their day of traveling. Shortly after, the Alpenguides (Natalie and Anna) taught the girls all the tricks for setting up a tent. It was an exhilarating evening of giggling and getting to know you games before everyone headed to bed.

The next morning Corrine received an early bird point for being out first camper out of her tent, the guides were impressed by how alert and helpful she was on the first morning of camp. Amara was out first Leader of the Day (LOD) and did a wonderful job of getting all the campers woken up and ready to go for the first Alpenyoga session!

After yoga the girls learned all about natural risks, backpacking, and hygiene in the backcountry. Then everyone partook in the first Alpenolympic event of the session a cathole digging completion, team Flamin' Buffalos won this event and team Pooper Scoopers were a close second.  All the girls did amazing and are feeling ready to put their skills to the test during backpacking. We then had our first care package opening party for Sarah, it had a little something for everyone and the girls were excited to write postcards and put on some stylish temporary tattoos.

The group then spent some time playing games led by Ellie who did a great job of teaching the rules and facilitating a game of Poison Dart Frog amongst the group. Emma became our afternoon LOD and helped gather and prepare the crew for the cavern tour. Everyone has an amazing time exploring the caverns and could not stop talking about it when they arrived back at camp. Upon their arrival the wind started to pick up, luckily we had Sarah around to offer both her comedic relief and youthful speed as she hurried around keeping camp from flying away. For dinner we had campfire pocket stews and all the girls created unique shape out of the tinfoil holding their food. Holly blew us away with her rendition of a beagle seen around the campground, her artistic skills were very impressive and we can wait to see what she will create next!

Before bed we played a game involving a great impersonation of a velociraptor by Rowan which made all the girls break out in giggles. There was then a quick sprinkle of rain and what appeared to be an oncoming storm so Isabel came to the rescue and got all the girls to put on their raincoats and go inside their tents. It's not surprise she become our next LOD!

The next day everyone woke up excited for the oncoming backpacking trip. The morning was spent learning how to pack up and organize their backpacks. Before taking off to the trailhead we had a quick Alpenolympic involving storytelling and strawberry donuts. Ella came forth with some amazing story telling skills and won our storytelling event by creating a riveting tale of a mountain climbing donut and a pesky raccoon. Our runner up Emma had a tale of a donut who traveled to Paris with her, everyone had so many creative ideas!

Everyone is to thrilled to start their first backpacking trip this afternoon and eager to start earning their skills beads. The girls have chosen a variety of skill beads to learn including the wilderness first aid bead, shelter bead, and yoga bead! They are well on their way to the first backcountry campsite and will be so excited to share the details of their trip with you at the end of camp. Our next and final blog will be after the backpacking trip ends on the evening of the 28th.

I powered myself with my own positiveness. I pushed myself and tested my limits and it was amazing. I transformed in to someone… who could do anything.