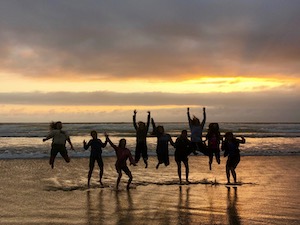 We are now on the Oregon coast, it is beautiful!

The Columbia, Cascades & Coast Alpengirls hiked to a lighthouse and walked part of the Lewis & Clark Discovery Trail before spending some quiet time on the beach looking at the ocean:)

Surfing was a good time for all and Nava did especially well and stood up on her board multiple times!

Taylor built a shelter beach using a tarp and rope on the beach to work towards earning her Shelter Skill Bead.

Gotcha! game was won by Caitlin and Jane performed a skit of the backpacking trip for her group to make another step closer to earning her Navigation Skill Bead.

A blister was cared for by Keali as she took on step closer to earning her Wilderness First Aid Skill Bead and Finleigh led a group discussion to finish off her Group Living Skill Bead.

Evelyn was the final Leader of the Day (LOD) for the trip and led a hike to the lighthouse and Julianna led the group into a celebration of surfing by running into the ocean at sunset which was very very pretty and they had a lot of fun even though it was cold:)

We're closing up with awards and pizza tonight and we'll say goodbye tomorrow - it's been a lot of fun with you Alpengirls - thank you - Sophie and Sofia!

Our daughter, Linnea has attended 3 Alpengirl camps and thoroughly enjoyed them all! She has made many friends from the three camps that she still keeps in touch with on a regular basis. Every time we picked her up from the airport after a camp, she has been full of stories of...