Off to a Great Start! 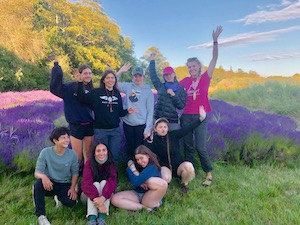 From WA Coast Backpacker II Alpenguides (Mattie & Rose): The group arrived in Seattle and we swiftly headed out of the city toward the lovely Olympic Peninsula. Our first night was spent camping at a lovely lavender farm near in Sequim.

We all shared in on a dinner of welcome to camp burritos with loads of organic veggies before setting up tents and heading to bed.

The next morning our first leader of the day (Ava) woke everyone up for yoga who hadn’t already been awaken by the local rooster and helped us plan for the day ahead. Eva and Grace assisted in making a delicious breakfast of Rainbow Hash & Eggs before we delved into talks about hygiene, natural risks, and LNT practices.

After declaring skills beads for the session the group played an exciting game of sharks and minnows in the lavender fields. Francesca and Hazel did an incredible jobs as sharks turning everyone else into seaweed.

After a hearty lunch Grace led part of the group in some mediation in the afternoon sun. Everyone then split up into their backcountry cook groups and made a plan for food safety. Jack and Esme led their group in helping come up with some creative adjectives for the other cook groups name. We eventually landed on the Smelly Octupi and Voluptuous Goats.

We then took a break to explore the farm, Halinka proved to be an animal whisperer and won over all the local goats. The crew also enjoyed some delicious lavender ice cream before we took a look at the coastal hiking route and to tidal charts!

Tonight we are thrilled to have our first Alpenolympic event the costume contest before we get a restful sleep before we embark on our 6 day, 5 night coastal backpacking adventure!

I have learned so much from this trip, from that dragonskin lichon grows and inch in 10 years to how to compress a sleeping bag.