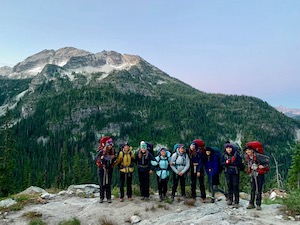 From Cascades Sea to Summit Alpenguides (Arlee & Sarah): Cascades Sea to Summit girls have officially reached the end of their amazing backpacking trip through the northern cascades! Along the way we saw lots of wildlife including Lola the Black Bear, a posing pika, a mamma grouse and her chicks and even heard some moose! The first day of backpacking Ursula did a great job of leading the group to our first campsite where the girls got to play in the crystal clear river water and get used to their packs. Early the next morning Lola the Bear made her first short appearance as the girls were still asleep in their tents. We then made our way to a stunning campsite in a meadow at the base of some jagged mountain tops. We had lunch at a mountain lake where Grace, Mira and Avery all went for a quick dip in the cold water! The next day was bakery day!! We started hiking at 4am and Emily led the pack underneath the amazing early morning mountain stars. The pastries were well earned and devoured quickly at Stekein Bakery quickly followed by a river washing party where Ella showed us her mermaid moves! Ila and Sophia kept the group positive with their hilarious stories during our next day hiking to a campsite right on the side of bright teal colored river where we had a lady daisy party! After our last day of backpacking Lola the Bear made a second appearance so the Alpenguide’s made the decision to hike the rest of the way out to the van and camp in the front country. The hike out was underneath a beautiful huge moon and filled with the group singing Taylor swift songs. Spirits are high today as Callen opened her happy camper package and the girls take showers while getting all ready for the amazing kayaking trip coming up soon. The backpackers did a great jb and we're looking forward to being on the water for some paddling next!

Heather came back from the trip beaming with confidence! She seems to feel more comfortable in her teenage skin. She is constantly getting comments on how healthy and tone she came back. Your philosophy and small family/like group has given her a sense of self worth and self...