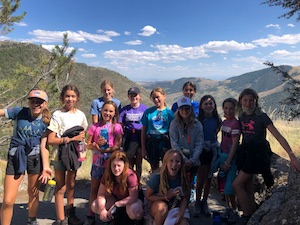 We are excited to report that Montana Lil’s B has had a fun filled first 24 hours! After leaving the airport, we headed straight to our campsite at Lewis and Clark Caverns State Park. Our first Leader of the Day of the session, Maddie, sat up front and was the DJ, with help from Talia and Valentina. Once we arrived to camp, we learned how to set up our tents and then ate some amazing burritos, served by our LOD Maddie! We opened up Maddie’s surprise care package, and then had a funny fashion show with all of the costumes from the package. Tatum and Olive stole the show with their coordinated poses. Then we played a delicious get-to-know you game involving M&M’s, where Amelia asked some fun and intriguing questions!

After a good night’s rest, we started today with our first yoga class. Gabi and Bailey showed us their skills, and decided to try to get their yoga bead this session. Our Leader of the Day, Olive, helped served us a pancake breakfast with yogurt, blueberries and sausage. In order to stay cool, we played a lot of water games, where Laila and Ceci led their team to victory in the water sponge toss.

After eating lunch, we headed up to explore the Lewis and Clark caverns! The cave, which is millions of years old, is filled with cool rock formations called stalactites and stalagmites. As we descended over 600 steps through the cave, Ellie, Beatrice and Delilah saw groups of bats that were sleeping on the ceiling!

Now we are back at camp and we are about to start our campfire dinner and s’mores. We start our backpacking adventure tomorrow, and we are all so excited!

Our daughter, Maia participated in the Alpengirl program and really enjoyed the experience. She is thirteen and this was her first time with Alpengirl at the Montana Horse camp which was a two-week session. We sent her in order to experience camaraderie amongst girls her age in ...

What Kind of Girl Are You?
“What we think, we become.” A couple of years ago, I moved to Bozeman in the dead of winter. Passes were closed, roads narrowed by mountains of snow, and I was terrified to drive - but I was eager to...
View Blog

© 2022 Alpengirl Inc, Website designed by Rip It Up Chick and powered by BitForge