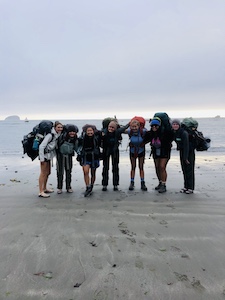 What a ride this has been! We walked out of the backcountry with a fresh layer of sand, dirt, and sap, the girls singing songs together, keeping a fast pace even with some of the blisters acquired along the way. They rocked this trip! The last three days of backpacking were smoother than the first with gentler terrain and getting to sleep in past 5:30am. On our fourth day of backpacking we got to hike through some tide pools that had sea urchins, anemones, and starfish! We made it to our campsite at about 2pm and the girls had time to play games and explore. It was a bit chilly and overcast that day and the girls ended up putting themselves to bed around 8:30/9 and got about 10 hours of sleep! The next day started off cloudy too but the sun broke through around 11am and was warm the rest of the day. We got to camp at about 1pm and after lunch many girls decided to take a nap or bask in the sun. We did an alpenolymic of fairy house building that afternoon and there were some creative renditions with sea glass, a swing, an agriculture fairy community, and a boat house (that was later sent off to sea). It wasn’t hard to rally the girls on our last day, they were all eager to shower and be able to listen to music. Today the girls are excited to see Port Townsend but are especially excited for ice cream! They have been an awesome crew with plenty of entertainment and enthusiasm to go around, wonderful trip with you WA Coast Backpackers II!

Finally a few minutes to send you a quick note and say once again how much I notice the change in Emily when she returns from a trip with you guys! She absolutely loves coming out there. This year was a different reaction than last year - happy to be home but more confident and...

What Kind of Girl Are You?
“What we think, we become.” A couple of years ago, I moved to Bozeman in the dead of winter. Passes were closed, roads narrowed by mountains of snow, and I was terrified to drive - but I was eager to...
View Blog

© 2022 Alpengirl Inc, Website designed by Rip It Up Chick and powered by BitForge