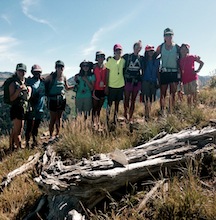 Alpengirls in Idaho loved kayaking yesterday! Many of them listed it as their “rose” (something they really liked) at the end of the day. It was difficult to steer at first, but once the girls learned to communicate with their paddle partners, they were paddling much straighter by the end.

We had a spontaneous dance party after 9:15 activity last night and the girls busted out some great moves! They sure know how to shake a leg!

This morning the girls saw the sun come up behind the Grand Teton and, right before yoga, saw a herd of 5 moose!

Weather has been hot, hot, hot during the day and very chilly at night. Girls seemed to be warm enough in sleeping bags, but we lent them extra fleeces in the morning. Girls are holding up pretty well with the hot weather, thanks to the occasional dips in the river during the kayak and the air-conditioned van ride.

Last night, we enjoyed spaghetti with salad and garlic bread cooked by Deirdre and Sami. Deeeeelish!

Today the girls played lots of games in the park during the food shopping time, including Museum, Darth Vader, Ninja, Little Sally Walker, and Wah.

The girls loved kayaking and excelled during the hike yesterday... Zero complaints during 3.2 miles of uphill in the heat!! Also, they sang lots of Disney songs during the paddle yesterday... Broadway recruiters should be knocking on their door soon!

Skill Beads Girls Have Chosen to “Go For”:

Last night, a couple of girls had a little bit of homesickness, but seem to do well as soon as they were distracted.

Overall the group is doing quite well, so many games and lots of adventure action in the mountains and valleys, it’s a great start to camp.

The group will be rafting until July 7 (there will be no blogs posted during that time nor photos) and then just a few more days and that will be the end of the session. Girls will call home to parents on July 9 and departures are July 10. Onward!

Backpacking is like the dinner you thought you wouldn't like but did. You have to finish the dinner to get the dessert of great views and more fun activities!